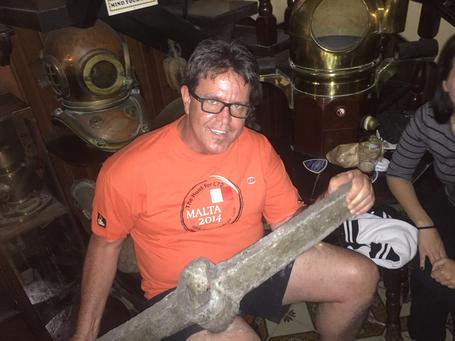 I am the son of an Irish mother and Polish Father who met and married in Scotland at the height of WWII.   My father was a seaman in the Polish Navy and served aboard the escort destroyer ORP Kujawiak which sank in the Mediterranean during Operation Harpoon in June of 1942.  I was part of the team which located the wreck in 2014 and recovered its bell in 2017.

As a marine archaeologist, divemaster, and underwater photographer I have made hundreds of dives in warm waters as well as on Lake Erie.   My photography has been featured by National Geographic, the Odyssey Online, Florida Keys Magazine, and others.

I have taken photos for the RGM Watch Company, Aquadive Watches, and Halios Watches.

As part of my avocational work, I have been a member of MAST, the Maritime Archaeological Survey Team, since 2006 and served as the chairman of the board from 2012 until 2018. I have participated in numerous archaeological surveys as as a survey diver, dive safety officer, and project manager.

I served as the project manager on the survey of the Brig Sultan, which sank in Lake Erie in 1864, and was one of the authors of the technical report on the shipwreck.  I have a BA in political science and history, an MEd in education, and a BA in Archaeology.

I am a member of the Explorer's Club (MN '18) and a Fellow of the Royal Geographical Society with the Institute of British Geographers.

I have taught school in Cleveland for 18 years and split my time between our boat in Florida and our home in Twinsburg, Ohio.